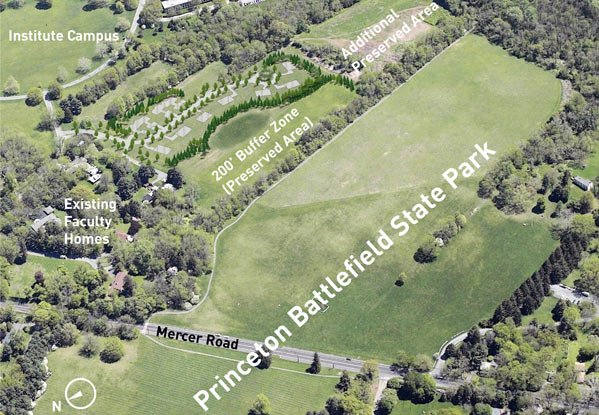 The battlefield where George Washington defeated the British in the Battle of Princeton is being desecrated! The Institute for Advanced Study is tearing up the earth as this blog is being written; the area they are digging up is called Maxwell’s Field. This is an important section of the battlefield where Washington and his troops turned the tide of the battle in their favor.

Unfortunately this piece of property is in private hands and is not under the protection of as a New Jersey Historic or National site. This is a very regrettable as both the local planning board and state court system has allowed the desecration of this hollowed ground to go forward. The Institute for Advanced Study is going to build residential housing for its visiting scholars. I must point out that the housing market in the Princeton area is flooded with suitable housing and there is no real need to destroy this historic site.

Now you might be asking yourself why is it so important that the battlefield be preserved? The answer is very simple if we destroy those history sites that saw pivotal events happen there, then we will lose another part of our history that is irreplaceable. In the soil of this site there are artifacts that yet to have been recovered and there is more than likely unmarked graves on the site of those who fell during the battle. Thus, this is hollowed ground and should never be disturbed for any sort of development of any kind.

The following is a quote from the Princeton Battlefield Society on why this site is so important, “Located adjacent to the existing Princeton Battlefield State Park, this property witnessed one of the most legendary moments of the American Revolution when both the battle and the nation’s independence hung in the balance. George Washington launched a decisive charge on this property that drove the Redcoats from the field. It was Washington’s first victory over British regulars in the field, and the culmination of a daring, 10-day campaign that began with Washington’s famous crossing of the Delaware.” I thought it important enough to include this information to explain why I am writing about this fight to preserve this important piece of American history.

Now here is the part where you the reader can help preserve this historic site. Again a quote from the society’s webpage, “Please consider signing the letter to New Jersey Governor Chris Christie expressing your support for the preservation of the Princeton battlefield. Further, please like and share the “Save Princeton” Facebook page; this page posts updates and highlights events rooted in preserving and commemorating the Princeton battlefield. Every voice makes a difference.” I do hope that you the reader does do as the society has asked us to do.

As of Monday, January 5th, a number of State Legislators met with the DEP Commissioner and showed him the reports that show that Maxwell’s Field has wetlands on it. It looks like the Institute has quite possibly lied and misled both the DEP and the EPA. The Commissioner is now examining the documents and will have people examine Maxwell’s Field for wetlands. In the mean time construction work is taking place, let us hope that it is not too late!

As of yesterday December 13th, the Institute for Advanced Study has agreed to sell part of Maxwell’s Field so that it can be preserved.

Hurray! An important historical site will be preserved for future generations to learn about.