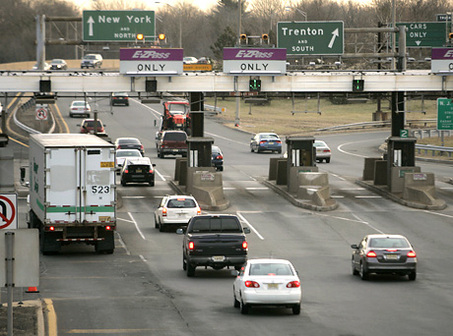 Should the New Jersey Turnpike be made a toll free road? With the problems caused by the traffic, mostly big trucks, that is traveling on parallel roads to the Turnpike it would seem that making the Turnpike into a free interstate highway would be beneficial for everyone who does not have to use this toll road. When you look at State Routes 1 and 130 for example you see highways that are overloaded with truck traffic that prevents the swift flow of vehicles down the roadway.

Back in 1992 there was an attempt at legislation as reported by the New York Times, “The Republican majority in the Legislature unveiled a proposal today to eliminate tolls on both the New Jersey Turnpike and the Garden State Parkway, upstaging Gov. Jim Florio, who has suggested removing tolls only from the Garden State.”

“The bill would turn over operation of the Garden State Parkway, the New Jersey Turnpike and the Atlantic City Expressway to the Department of Transportation.

Mr. DeCroce (Assemblyman from Morris Plains)) said he expected the legislation to ultimately accomplish three goals: retire the debt of the toll authorities, place a moratorium on issuing new bonds, and phase out tolls “by a specified date, beginning with those on the Garden State Parkway.” Replacement Funds Needed

As you should know, it failed to pass and the tolls are still in effect. Reporters Larry Higgs and Steve Strunsky said in an article the following “A 2015 report by the International Bridge, Tunnel and Turnpike Association said the Turnpike Authority was tops in 2013, earning $1.41 billion, followed by the Port Authority at $1.33 billion. Those revenues are before operating expenses and debt payments.

Turnpike officials expect to earn $1.48 billion or 88 percent of its projected $1.68 billion 2015 revenues from tolls. The remainder comes from E-ZPass fees, concessions, the PNC Arts Center and other “non-operating” revenue.”

Yet with all its earnings the debt is never paid off and they make sure that it never will be by taking selling more bonds. The only thing done to save any money was to combine the Turnpike, Garden State Parkway and the Atlantic City Expressway into one big authority in 2003. The excuse back in 1992 was this “A very cursory look will show that a very, very substantial number of Turnpike tolls come from interstate travelers and big trucks,” Mr. Ambrosio said. “If we were to eliminate tolls, we would be subsidizing interstate trucking.””

People have proposed abolishing these toll roads from time to time and even one group, Citizens Against Tolls, came up with figures showing that if they were turned into interstate highways the Federal Government would help pay most of the maintenance costs. Unfortunately no one would listen and the group is now inactive. Take a look at what they say on their website and you will come away realizing how correct they were and are!

Every time I travel on Route 1 it is filled with big trucks hogging the left and center lanes, tailgating, running red lights and causing accidents. The biggest users are the giant garbage haulers heading to Pennsylvania garbage dumps and beyond. They are actively avoiding the high Turnpike tolls and destroying our local highways, this must stop now! It is the 21st Century and we still are letting the politicians take our money for a roadway that has been paid for many times over. So go tell your legislator you want the tolls ended now!