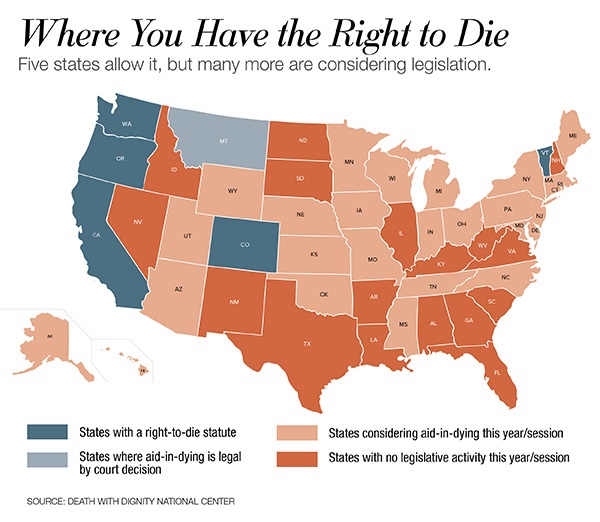 It looks like New Jersey will have an Physician Assisted Suicide (Death with Dignity) law soon. Governor Murphy has indicated he will sign it into law in the very near future. I will give you both sides to this debate beginning below.

This is the what a doctor says against it, “Firstly, proponents of legalizing assisted suicide say that it will be associated with a decrease of general, or unassisted suicide by offering a legal option. But this is incorrect. In states that have legalized assisted suicide, the rates of all-cause suicide go up, not just assisted suicide. This occurrence is known as “suicide contagion.” Suicide is a major health crisis, and if we legalize assisted suicide in New Jersey, we would only add to the problem.

A study published in the Southern Medical Journal demonstrated that legalizing assisted suicide in other states has led to a rise in overall suicide rates — assisted and unassisted — in those states. The results of the study show that after controlling for various socioeconomic factors and other state-specific issues, assisted suicide states have a 6.3 percent increase in total suicide rates. And for individuals over 65 the increased suicide rate was found to be a staggering 14.5 percent. As stated in the study’s conclusion, “there is no evidence that PAS is associated with significant reductions in non-assisted suicide for either older or younger people.””

From those who are for it, “Death with dignity statutes allow mentally competent adult state residents who have a terminal illness with a confirmed prognosis of having 6 or fewer months to live to voluntarily request and receive a prescription medication to hasten their inevitable, imminent death. By adding a voluntary option to the continuum of end-of-life care, these laws give patients dignity, control, and peace of mind during their final days with family and loved ones. The protections in the Act ensure that patients remain the driving force in end-of-life care discussions.”

From the bill, “The attending physician shall ensure that all appropriate steps are carried out in accordance with the provisions before writing a prescription for medication that a qualified terminally ill patient may choose to self-administer.”

So this law would require a physician to have a hand in helping a terminally ill person to self terminate by prescribing a deadly medication to end their life. This runs in contradiction to the Hippocratic Oath that all physicians take.

Here is the modern version, “Most especially must I tread with care in matters of life and death. If it is given me to save a life, all thanks. But it may also be within my power to take a life; this awesome responsibility must be faced with great humbleness and awareness of my own frailty. Above all, I must not play at God.” So this bill flies in the face of what being a doctor is all about and to help a person to commit suicide runs counter to what a doctor is all about. On the other hand there is the patient need to end his or hers pain, etc. with a doctor’s help.

To me this is a conundrum and I myself would have a very hard time deciding to help someone end their life. What will happen when this is signed into law will put many physicians in a very difficult dilemma on what to do. Only time will tell what will happen.

One last thing is something that I do not want to get into, but everyone should be aware of. The fact that insurance companies will surly benefit from laws like this and I think that is detestable!