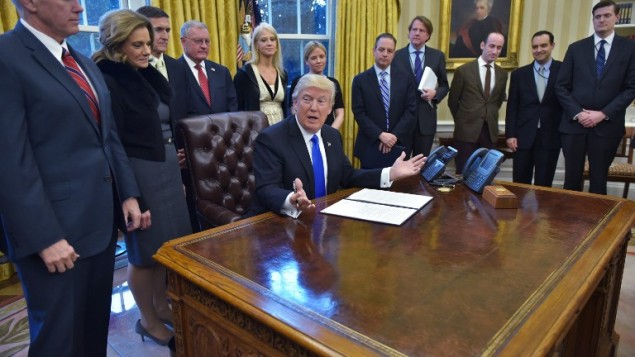 President Trump is now in office about one year and what has he accomplished?

So lets start with the new tax cut bill that he recently signed into law. Per The Hill, this bill “slashes the corporate tax rate from 35 percent to 21 percent and reduces individual rates as well as implements some key breaks.” Will this set of tax cuts really help the economy? It gives the big corporations large breaks in the amount of taxes they pay, but can doing this help the middle class or will it only further enlarge the Federal debt.

Next of course is the fact that Trump got Neil Grouch on the Supreme Court. So now we have a conservative on the court to replace the late Antonin Scalia. With all the sensitive cases that will be on the court’s calendar will Grouch be able to tip the court towards the conservative’s agenda or will he surprise the President? Only time will tell.

President Trump has rolled back many regulations such as repealing the Clean Power Plan, withdrawing from the Paris Climate agreement, the granting of a permit to Keystone to build their Keystone XL pipeline and now he has said that oil drilling can occur in areas where previously they could not. The President has expressed the opinion the Climate warming is a fantasy and thus not real. Again what he has done and wants to do may set us back 50 years, but I worry that the damage done in the short term may be very damaging to our local economies due to weather extremes that cause the use of more energy to keep us comfortable.

Everyone knows about the Muslim travel ban and how Trump keeps trying to implement it. But he also has increased immigration enforcement. Maybe this will help protect us from foreigners taking away jobs from American workers. At least that is what President Trump thinks and many of his fellow Republicans echo the same sentiments. Again only time will tell who is right.

One of the most conversational acts that Trump has done is put into motion the moving our embassy in Israel from Tel Aviv to Jerusalem, by doing so we have recognized the fact that Jerusalem is the capital of Israel. The United Nations as a whole, except for a few intelligent nations voted to condemn our nation for doing this. Will the Palestinians continue to use this move to block peace, again only time will tell.

The President has pulled out of the Trans-Pacific Partnership, a trade deal with Asian nations that Trump thinks was a very bad deal for the United States. Plus he want to renegotiate North American Free Trade Agreement with Canada and Mexico which has not really worked well for us. If the President can not negotiate a new agreement then he most likely also pull out of this one too.

Cuba has suffered a setback in relations when President Trump followed up on his pledge to roll back Obama’s opening up of relations with Cuba. By tightening travel and commercial ties plus placing new financial restrictions on Havana This was prompted by concerns over a series of bizarre so called sonic attacks targeting our diplomats in the Cuba.

Well that is all for now on Trump’s first year, I hope that we have a better year for the country as a whole than last year.