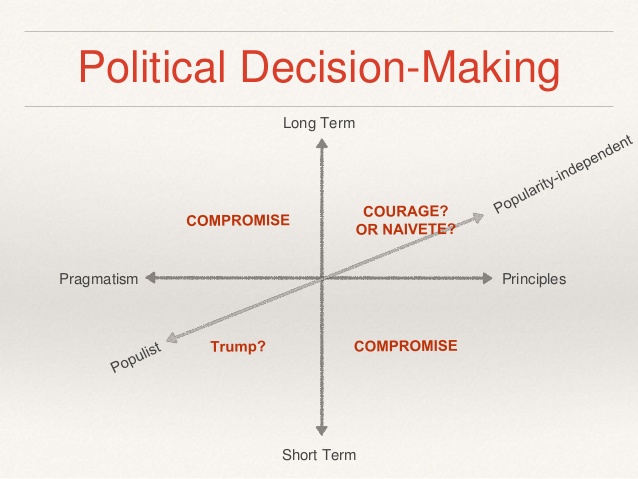 The art of compromise seems to be dying, at least politically.

With the death of Senator John McCain the Republicans have lost one of those politicians who knew how to work with the political opposition across the aisle to find a compromise that works for the majority.

President Trump wants everything his way and if he does not , Trump acts as if the world lies and he is the only one that knows what is good for us.

From an article in Forbes about the art of political compromise, “Starting at the Constitutional Convention in the summer of 1787, our entire government is based on compromise.  We had the Connecticut compromise, for example, which was based on the novel idea that the government could be partly federal and partly state-based.  James Madison, recognized as the author of the Constitution, introduced several ideas that he could not get through the Convention, but which he compromised into something else.” Furthermore, “Otto van Bismarck famously said, “Politics is the art of the possible.”  And so compromise seeks the “best possible” solution.”

Our politicians have become immune to this very concept, that there has to be give and take in all negotiations. With the polarization of politics too many are either on the left or the right politically and can not see that if they just could see what their political counterparts do, then things would be better for all Americans.

Those so called ‘old time’ politicians who knew how to negotiate are fading away as they are either pushed out or retiring because they are fed up with the way the party leaders who do not know how to bend a little to get things done.

It is those same politicians who can not see that they are holding the American people hostage by their intransigence. By this foolish unwillingness to just listen and realize that the other side has a valid point(s) our government has been unable to function without a large majority of the same political philosophy. When there is an almost equal number of each party, then we have government shutdowns and other silly distractions.

Someday we will wake up and find that our government is in political deadlock and neither side will give the other some compromise to help pass a critical bill. This will happen and when it does, you the voter will be responsible, for you did not look beyond the political diatribe that you want to hear and never considered the fact that we can not be stiff as a board in the political arena, but instead we must learn to compromise so that we can bend some so our government does not break!