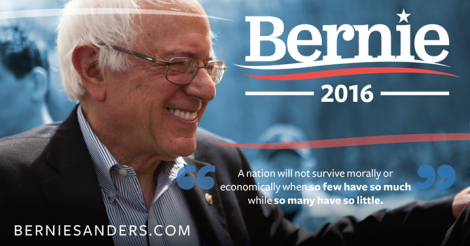 Bernie Sanders is now surging ahead of Hillary Clinton in the latest Gallop Poll. Per Gallop- “His favorable rating among Americans has doubled since Gallup’s initial reading in March, rising to 24% from 12% as he has become better known. Hillary Clinton’s rating has slipped to 43% from 48% in April. At the same time, Clinton’s unfavorable rating increased to 46%, tilting her image negative and producing her worst net favorable score since December 2007.”

Senator Sanders is for now a Democrat from the state of Vermont who was in the House before being elected to his present Senate seat. Per The Atlantic ,“He may not command the same devotion among liberals as Elizabeth Warren, but he has proved to be popular on social media and comes across, like Ron Paul before him, as an older-guy-who-gets-the-Internet. If nothing else, Sanders has emerged as the most interesting Democratic alternative to Clinton, at least as compared to Martin O’Malley, Jim Webb, or Lincoln Chafee.” To me he is a Progressive Socialist Democrat that wants to raise the Federal Minimum Wage to $15.00 per hour and wants to breakup the way our Capitalist form of business works. All to make the common person be in charge and not have the economy held hostage by the rich and powerful.

There is a contradiction in what he says and what is does. Per The Daily Caller,“Democratic presidential hopeful and self-described socialist Bernie Sanders introduced a bill to raise the federal minimum wage to $15 per hour this week. However, Sanders pays his own interns just $12 per hour, notes the Media Research Center.” My big question is why is he only paying his interns only $12.00 per hour when you are all but shouting that it should be $15.00 per hour? This seems to be very hypocritical of him; especially as he is running for our nations’ highest office.

Now is he realistic in wanting a $15.00 per hour minimum wage? He is not according to Forbes, “This isn’t, perhaps, quite what Bernie Sanders thinks he is saying over on his Senate page but it is indeed what he is saying. He’s providing us with the proof perfect that a rise in the minimum wage to $15 an hour will costs jobs. For he’s telling us that the rise in the minimum wage will be paid for by a combination of three things. Firstly, a rise in prices of goods made by minimum wage labour. This will reduce the volume of such goods purchased (no, really, demand curves do slope downwards) and thus lead to less minimum wage labour being employed. Part of it will be paid for by lower profits. And yes, demand curves really do slope downwards meaning that fewer people will be interested in the profits that can be earned by employing minimum wage labour: thus less minimum wage labour will be employed. Finally, he tells us that there will be a forced rise in the productivity with which labour is used: and a rise in productivity is the same thing as stating that less labour will be used.

I have to agree with Mr. Worstall that the economics do not logically follow through to the result that he is advocating. The idea of raising the minimum wage so radically is very troubling to me and makes me wonder how much thought Senator Sanders has really put into this idea.

Hillary Clinton has much to fear from this Sanders running for President. He has been true to his political ideals for a very long time. Take a look at his website, https://berniesanders.com/, and see what he is saying. But, make sure you take a look at what other independent sources are saying about this man. Then you will have all the facts that you will need to decide. Just as an aside, you should be doing this for any candidate.