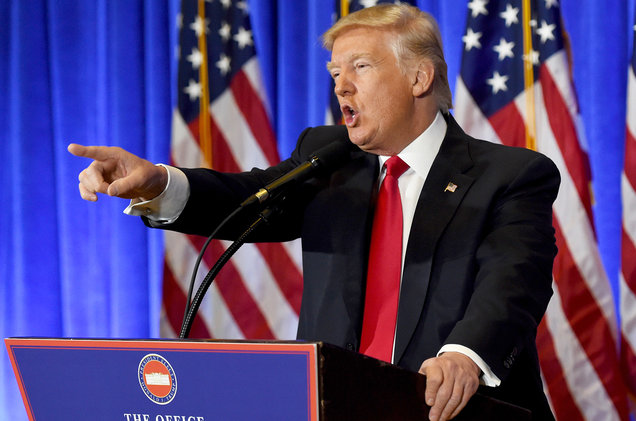 President Trump and the Press Corps seem be at odds. The President has locked out certain news reporters from the daily news briefing. Is this a threat to the freedom of the press?

Per the New York Times, “Hours after the speech, as if to demonstrate Mr. Trump’s determination to punish reporters whose coverage he dislikes, Sean Spicer, the White House press secretary, barred journalists from The New York Times and several other news organizations from attending his daily briefing, a highly unusual breach of relations between the White House and its press corps.” The speech that the Times is referring to is the one Trump made to the Conservative Political Action Conference this past Friday.

The President called journalists “the enemy of the people” and saying that members of his own F.B.I. are “leakers” who are putting the nation at risk. Also he has said that there have been too many anonymously published news articles that reflect poorly on him. Plus he has said that the FBI is a porous agency that is leaking classified information.

Our President seems to love using Twitter and the power of friendly media outlets to try to pound his critics into submission. What he has forgotten is that he can not make the press do his bidding nor has he the right to keep out of news conferences those of the press he finds disdainful. Yes I know that he can keep them out, but Trump must remember that he is the elected President of the United State and not the head of some business where he can more or less do what he likes. As President he has to remember that the Fourth Estate (the press) has tremendous influence on what people hear on the news and help form the public’s opinion on important topics.

Trump has to stop his rants and work within the system. For if he doesn’t or won’t then his Presidency could be in jeopardy. You and President Trump have to remember that the Press act as an information funnel and that funnel can and is sometimes used to change the public’s opinion of what the President is doing. This can result in a Presidency where nothing gets done because Congress senses that the President has no public support and thus his power to influence legislation is seriously diminished.

So either President Trump works the political system within the framework of our having a free and open Press. Or he will find himself in a very frustrating situation where he will be shouting and/or ranting into a dead microphone with no one caring to listen to what he has to say.