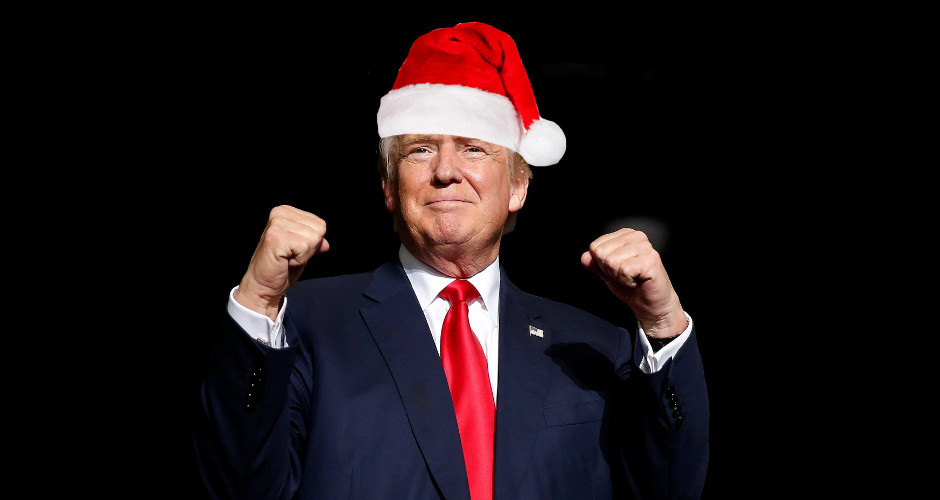 Here is my version of President Trump’s ride on Christmas eve. Please note that no Democrats were injured nor any bill signed!

So here it is-

‘Twas the night before Christmas, when all through the House of Representatives

Not a politician was stirring, not even the Speaker of the House named Nancy;

The impeachment papers were laid by the chimney with care,

In hopes that The Donald soon would be there;

The political pundits were nestled all snug in their beds;

While visions of money bags danced in their heads;

And Nancy Pelosi with her gavel, and I in my MAGA cap ready for space travel,

Had just settled our brains for a long winter’s recess nap,

When out on the floor there arose such a clatter,

I sprang from my seat to see what was the matter.

Away to the window I flew like a flash,

Tore open the shutters and threw up the sash.

The moon on the breast of the new-fallen snow,

Gave a lustre of midday to objects below,

When what to my wondering eyes did appear,

But President Trump in a golf cart pulled by eight tiny rein-deer,

With a little flick of his so lively wrist did the cart go across the White House lawn,

I knew in a moment he must be President T.

More rapid than bald eagles his coursers they came,

And he whistled, and shouted, and called them by name:

On, Al Frankenstein ! on, Lyin’ Ted ! on, Slippery James Comey and Boot-Edge-Edge !

As leaves that before the wild hurricane fly,

When they meet with an obstacle, mount to the sky;

So up to the capital rotunda the coursers they flew

With the golf cart full of political tools, and some very foolish notions too—

And then, in a twinkling, I heard about the impeachment

The prancing and pawing of each little burden of proof.

As I drew in my head, and was turning around,

Down the chimney Trump came with a bound.

He was dressed all in Old Glory, from his head to his foot,

And his clothes were all red, white and blue not even covered with a little soot;

A sack full of bills he had flung on his back,

And he looked like a politician just opening his bag of political skills.

His eyes—how they twinkled! his dimples, how merry!

His droll little mouth was drawn up like a bow,

And the hair on his head was as white as the snow;

I laughed when I saw him, in spite of myself;

A wink of his eye and a twist of his head

Soon gave me to know I had nothing to dread;

Just taxes and bills and other things that were not dead!

He spoke not a word, but went straight to his work,

And he created tweets on his phone; then turned on his own two feet to show me his latest tweet,

And laying his finger aside of his nose,

And giving a nod, up into the sky he rose;

But I heard him exclaim, ere he drove out of sight—

“Happy Christmas to all, and to all a good Republicans a merry good night!”

Please understand that I make no political endorsement nor do I even own a MAGA cap. I just wrote the changes to that old poem “‘Twas the Night before Christmas” that came into my head!

A very Happy Hanukah and a Merry Christmas to all.