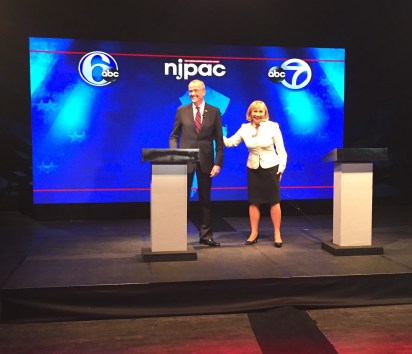 Election for Governor of New Jersey Part 2 is about Kim Guadagno’s television advertisements.

Phil Murphy has not released his tax return as promised is what this ad is about. He claims that he would get his tax return for 2016 out a month before the election, well it is now seven days till that faithful day and no sign of his releasing the information. Also he is not being up front on his dealings at Goldman Sachs while he worked there. Something is being hidden and it smells somewhat because Mr. Murphy is saying one thing and not following through. Very bad for someone who wants to be our governor. Guadagno has released her tax return(s) and since she worked as a public servant her employment records are available to the public. How about being honest with us Phil and do what you promised.

The second ad is about Phil’s sanctuary state policy, where Guadagno is against this and Murphy wants to defy the Federal government thus protecting every illegal alien, including criminal illegal immigrants. This is problematic and short sighted, Phil needs to rethink this. Guadagno has a good point here and notice that she came on the TV and Phil just could not make the time to do so, that means that Phil can not think quickly on his feet. This is a bad thing for someone who wants to be Governor!

Guadagno’s third ad is a video of the second (and final debate) which really shows how the two candidates can handle themselves. Murphy did not give a good showing in either debate and Kim is very smart to have this one on her YouTube channel. I think that everyone who did not see this debate when it originally aired should look at it before making a final decision on who to vote for.

Another ad has President Clinton addressing Congress about illegal aliens and he is not in favor of allowing them to be here at all. Kim was very smart to put this up as it shows just how out of touch Phil is.

Kim has many more ads on her YouTube channel and you can make comments, this is something that you can not do on Mr. Murphy’s YouTube channel. That is very telling to me, makes me think that Murphy is very afraid to have unfavorable comments posted. Very troubling to me, Mr. Murphy what kind of governor would he make if he does not take criticism well?

I urge you to do two things, one look at these ads on both YouTube channels and do not let yourself get hung up on any one policy that a candidate has. Look at what the candidate says in total and then you will have a very good idea for who you should vote for.

So this coming Tuesday, go to your local polling place and vote. It does not mater who you vote for, it just is something that is a very democratic thing to do!