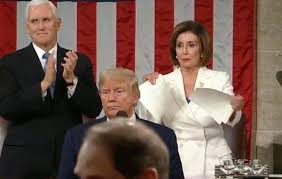 Political intrigue is afoot for a while now and even more since President Trump was not thrown out of office.

I find it interesting that Nancy Pelosi thought it was a good idea to rip up Trump’s State of the Union speech while everyone else was either politely standing and not clapping or were clapping. She does not seem to understand how to be a class act at all!

And Trump is again under attack for getting rid of those who he has the right to dismiss because he can not trust them. Yes, some of these people did testify at his impeachment trial and others were holdovers from the Obama era. Why the President waited till now to get rid of the latter makes no sense to me, but what the heck who am I to stand in judgment.

Also I find it very interesting that the Democratic Party is continuing with fact finding, well I politely will call it that, into anything and everything that they think can hurt Trump.

For the good of the country do not the politicos understand that what they are doing is causing rifts not only within political parties, but also in the fabric of American society? I think not! All these Progressives seem able to do is attack, criticize and demean. Nothing positive can come out of this at all.

While at the same time the Conservatives are having a field day because their man in the White House was not thrown out. And they also are on the attack. Biden, you better watch out! Iowa was bad and I doubt New Hampshire will be any better for you. Letting your son do what he has done and is doing was just plain stupid on your part.

And how about Bernie Sanders and Elizabeth Warren! What a pair of bookends they are turning out to be. He being a socialist progressive intelligentsia and her a first class twister of the truth.

Look how Bernie got beaten by Pete Buttigieg in the Iowa Caucus, a homosexual man who highest held office is mayor of South Bend Indiana. It shows that money and being a Senator does not equal being the better man. Oh, don’t get me wrong, I could care less that Buttigieg is gay. That does not really matter to me at all. What should matter is experience and what other qualities and ideas he would bring to the office of the President of the United States.

I really am frightened by the fact that what both parties (and the news media too) seem to forget is that most of America tends to hover around the middle of the political spectrum. What I think we need is a President who is more of a Moderate than either a Conservative or Progressive.