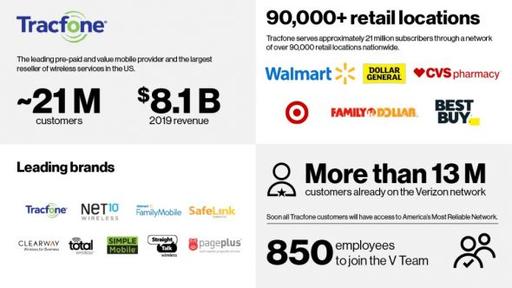 Verizon has announced that they will be acquiring Tracfone. This would give Verizon a big leg-up on AT&T and T-Mobile in the Mobile Virtual Network Operator (MVNO) marketplace.

Per BestMVNO, “Verizon announced that it has agreed to acquire Tracfone, the nation’s largest prepaid wireless provider for a total of up to $6.9 billion. Verizon is paying for the transaction with $3.125 billion in cash and $3.125 billion in common stock. The deal also includes up to an additional $650 million in future cash considerations related to the achievement of unnamed performance measures and other commercial agreements. Tracfone is owned by America Movil. The deal isn’t expected to close until the second half of 2021 subject to regulatory approval.

With the acquisition, Verizon gains access to more than 21 million prepaid wireless subscribers that are divided up among many different Tracfone owned prepaid brands. Tracfone’s other major brands include Straight Talk Wireless, Total Wireless, Walmart Family Mobile, Simple Mobile, SafeLink, Page Plus, NET10 Wireless, and GoSmart Mobile. Straight Talk Wireless is the biggest of the bunch with 9.743 million subscribers.”

From The Verge, “Tracfone is the largest reseller of wireless services in the US, with 21 million subscribers, around 850 employees, and a network of more than 90,000 retail locations. It’s owned by Mexico-based América Móvil, and along with the Tracfone brand, operates the Net10 and Straight Talk brands in the US.”

That is a lot of subscribers that could be added to the Verizon family. By acquiring Tracfone, Verizon will not only control the MVNO marketplace, but it will also become the largest supplier of cell phone subscribers. Plus those small MVNOs that will have to compete with the giant communications corporation known as Verizon might as well hangup their phones and go home.

Will the Federal Trade Commission (FTC) allow Verizon to swallow up a massive portion of the MVNO marketplace? Maybe. In reality the FTC would more than likely make Verizon sell some of companies to prevent the corporation from becoming a monopoly.

The reality for the consumer will more than likely be a much tighter marketplace and the cost of having a cell phone will be going up. Tracfone is known as the company that drives the low cost market for cell phone subscribers and now that Verizon is going to absorb them, we the consumer will not have the benefits that Tracfone’s deals had on the other MVNOs. Tracfone was the company that drove the low cost marketplace and that will more than likely come to an end when it is acquired by Verizon.