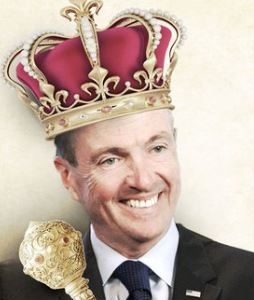 King Murphy might start worrying now that a federal judge shot down the governor of Pennsylvania coronavirus restrictions.

Per the Washington Post, “Shutdown restrictions ordered by Pennsylvania Gov. Tom Wolf to slow the spread of the novel coronavirus were unconstitutional, a federal judge ruled Monday — a decision that was quickly celebrated by President Trump, who said he hopes the decision is followed by similar pronouncements in other states.

The state’s limits on gatherings and closure of nonessential businesses violated the First Amendment and the due process and equal protection clauses of the 14th Amendment, according to a 66-page opinion by U.S. District Judge William Stickman IV, a Trump appointee.”

So beware governor Murphy! You could be next. Many would love to see you fall from your lofty superior moral perch. You’re so left of left wing liberals morals has destroyed many small businesses in New Jersey and I can foresee no bounce back because of the crazy rules you have imposed. These rules did not protect anyone here in New Jersey more than in other states. And your imposition of what is a border crossing check to prevent people coming from what you think as states that are at risk from coronavirus with New York and Connecticut has done nothing but cause trouble for people trying to go about their lives. Governor do you understand that interstate movement is a Federal matter not a state one?

So when is one of you cowards from the New Jersey State Legislature going to challenge Murphy’s ill-advised executive orders. Many businesses here are fed up with his draconian orders because they are killing small businesses and they are the life’s blood of New Jersey’s economy.

On another tack our tax and spend legislature and governor need to wake up to the facts. Taxes should be cut, not raised! Who do they think they are fooling? Not me and more than likely a goodly number of you reading this.

From CNBC, “Phil Murphy announced a deal Thursday with lawmakers to hike taxes on the state’s wealthiest residents as part of a plan to provide relief to the middle class from the coronavirus crisis.

If it’s signed into law, it would be one of the first in the country to address state revenue shortfalls caused by the economic crisis by upping collections on the rich.”

Senate President Steve Sweeney and Assembly Speaker Craig Coughlin made a deal with the devil (Murphy) that will further damage the economy of this state. Will they never learn the simple lesson of when you do not have the money, you cut back your spending? Everyone in New Jersey knows this and yet these politicians don’t seem to be able to grasp this simple concept.