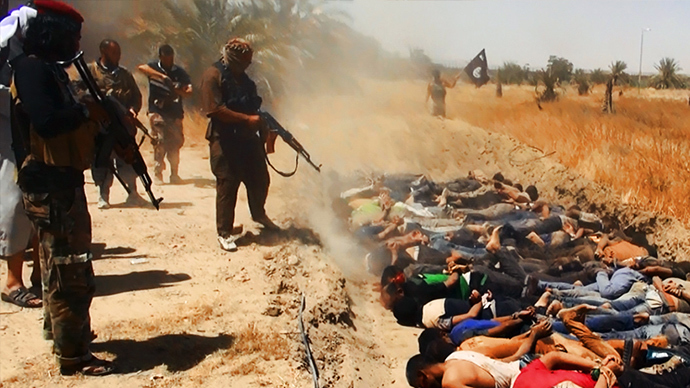 ISIS or ISIL (as the White House calls them) seems to only stand for one thing, religious intolerance. As a group they will not respect your religious beliefs and further more you will be persecuted to death by them. Any small infraction by even those who are followers of ISIS can cause the person who has violated the rules to be punished harshly. A report done by the Pew Research Center from September 2012 states that “of 197 countries and territories, identifies a sharp rise in religious limits globally and a 6% increase in restrictions in the four years until 2010.”

The report went on to say that “The project notes an acceleration in intolerance, reporting a 63% rise from mid-2009 to mid-2010 in numbers of countries that increased government restrictions, in comparison with Pew’s last survey that had noted a 56% rise.

Remarking on the trend, the report says: “The number of countries where harassment or intimidation of specific religious groups took place rose from 147 as of mid-2009, to 160 as of mid-2010.“” Today, in 2016, violence that is religious based is out of control; only last week in Brussels many died in attacks by followers of ISIS. These terrorists do not discriminate on who they attack nor do they care about where. They have attacked in public venues, in religious institutions; just about anywhere there are large groups of people present. And the methods they use minimize the chance for the attackers to live and maximize the rate of death and/or maiming of the victims.

All in the so called name of religion this is done and never is it about freedom for the attackers or for those they are supposed to represent. The attackers are told by their Imams that unbelievers do not rate any sign of respect nor do they have the right to even exist. Look at what has happened in Syria, when ISIS moves into an area those who are not willing to convert to their version of Islam are exterminated. Be they young or old no one is exempt from these religious fanatics, all are subject to Sharia Law. These sets of laws are very old and are not realistic in any way compared to our own nonreligious laws that we have. In fact being a Democracy is something that these terrorists fear, our way of life is antithetical to them. We are something to abhor and an example of why the terrorists kill us.

Our example of religious tolerance is something that the terrorists can not understand or tolerate. They just want to wipe us off the face of the earth or at least convert everyone to their religious beliefs. That is one of the big differences between us and ISIS, we strive for religious understanding and respect, while ISIS stands only for death for those who are different from them. Unfortunately this means that it is either we wipe ISIS and its follows from the face of this planet or this world will be in a perpetual state of war. That is something that is terrifying to thing about.